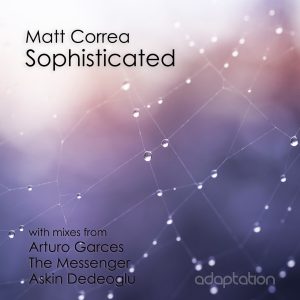 Featured in Essential Jackin at #13 and Essential Deep at #27 w/c 22nd May 2017. Check out and purchase the release here – www.traxsource.com/title/802558/sophisticated

Matt’s versatility continues with the crossover sounds of ‘Sophisticated’ complete with a funky bassline alongside classic deep chord stabs creating a sound normally associated with early west coast U.S deep house and the more recent Dutch jackin house sound. Another example of foolproof piece of music from the multi-talented man from Marbella!

First on remix duty is the consistent and well respected European duo The Messenger, who release on numerous underground labels and prefer to stay out of the limelight which their music is more than worthy of! This remix once again captures the classic early U.S west coast deep house sound and oozes quality throughout.

Voted one of the top 10 jackin house producers worldwide for the last few years is an actual U.S west coast producer – Arturo Garces. His classic sound is evident in another quality remix he’s done here for Adaptation Music, reminiscent of the DJ Sneak style and deep underground sound of Robsoul, which is no coincidence seeing as he has now graced that label more than once in the last few years..

Last but not least is a different take on the track from Turkish based Bulgarian producer Askin Dedeoglu, following on from his brilliant ‘Passion EP’. His remix offers deep, jackin and atmospheric elements backed up with a huge retro bassline that may appeal to old school house heads and fans of the UK/speed garage scene of the 1990s.