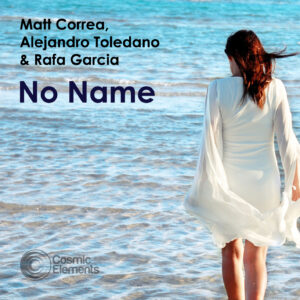 “Beautiful track, just takes me away to an eye catching beach. Full support on the station”
RTE Pulse Radio

“Nice vibes. Reminds me of the late nineties”
DJ RASOUL

Matt follows on from his strong EP release on our parent label Adaptation Music with a beautifully chilled and balearic offering in the form of ‘No Name’ featuring the vocals of Alejandra Toledano and the guitar provided by Rafa Garcia. The track consists of two separate versions, one in Spanish and the other Portuguese, accompanied by the lush instrumental.

Matt is an extremely talented and dedicated Spanish producer and DJ who divides his time between the world of lounge/chillout and deep house, producing for various labels as well as recently setting up his own imprint Guerilla Recordings alongside the vocal talents of Alejandra Toledano. When he’s not busy in the studio, you will find him DJing at numerous locations in Ibiza and mainland Spain. With a bright career in the industry ahead of him, expect to see a lot more quality music from Matt in the near future.

All tracks Written, Arranged and Produced by Matt Correa

All tracks mastered by Alex Senna