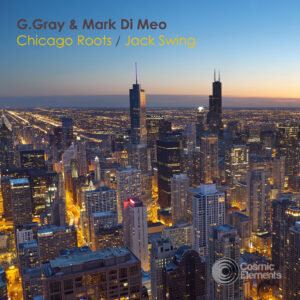 “What an amazing release….Deep and atmospheric chords and dreamy moods throughout both tracks”
CLUB FM, MACEDONIA

“Laidback, smooth, melodious – the perfect soundtrack to chill on a hot summer night…”
SPIRIT OF HOUSE

The third release on Cosmic Elements is a collaboration of two Italian producers, G.Gray & Mark Di Meo with ‘Chicago Roots’ and ‘Jack Swing’.
Hailing from Naples, G.Gray spent his youth learning jazz and blues piano before going on to perform at various venues in his home city. Just over a decade ago, he entered the world of house music production and has since gone on to release music and collaborate on various labels, including the legendary Tony Humphries’ label Tony Records.

Milanese producer Mark Di Meo is an accomplished DJ throughout Italy and has taken his sound to the dancefloors of Switzerland, Greece, Spain, U.K, U.S and Germany, playing alongside the likes of Louie Vega, Kenny Dope, Terry Hunter and Joe Claussell. Mark’s productions have already seen him gain a very respectable #1 position on download site Traxsource, with his music being supported by house music godfather Frankie Knuckles and featuring on the labels of top DJs and producers DJ Spen and Tony Humphries.